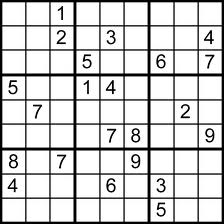 I have always been a cross-worder, even trying to make my own from a young age, but in the last year, I was shown how to Sudoku. Cassidy, my granddaughter, was the first to show me how. “It’s easy, Nana Jen!” she said, and by gosh, it was. At least, those rated only one star (I cheated at the rest). If a child can do it, I reasoned, surely I can. And I did.

But I got stuck. Anything past the first level, I got totally confused. I over-thunk everything, and soon there were little numbers in the upper-left corners of every box (more numbers than in the entire puzzle). Forget it! It’s too hard! I said to myself. I’m not a Sudoku person!

Then my son’s friend Zac came for a visit. There was a difficulty rating of 5 stars on the puzzle sitting before me, but I’d run out of crosswords, so this was the only game in town at the moment. (Ah! Like life…relevant notice, but not my present focus.) Zac offered to show me how he does these difficult ones. He stands back, mentally, and looks at the whole picture. He notices what numbers stand out, either by their placement, or their repetitiveness, and voila! numbers suggest themselves for the open spots. I finished that puzzle, I might add — though it took me two days — but what a sense of accomplishment! From virtually nothing, came something. It’s how we look at things, and the stories we tell ourselves as we look at them.

When I start talking ‘stories,’ you know Byron Katie can’t be far behind. And thus it is in this case: I was listening to CDs of her this afternoon as I prepared for the garage sale I’m having tomorrow. (Yes, the lady who thought she had NOTHING, nada, zip, actually has quite a few nice things to sell…) She talked about how what we see is a projection of our mind’s eye; I realized she was using more than a psychological term for certain behavior, it’s actually something we are all doing, all the time. Further, what we see others doing or saying/not saying, is what we ourselves say, or do, or not do. The censure we heap upon others, like the “three fingers pointing at us” when we point a finger at someone else, is actually what we think of ourselves. In fact, we can only project what we think or believe to be true. We are not capable of getting inside someone else’s head, so what we hear or see is what we think ourselves. Whew! That’s a biggie.

What if what I see is a film, projected by my mind? What if I’m the director? The picture is colored, affected — indeed, effected — by the eye behind the lens, and that eye is mine. If someone else were to step in and shoot from a different angle, it would still be a valid and true scene to him, and yet, paradoxically, invalid and untrue to me. Neither of us has the same vantage point, and both of us might swear till the cows come home that our view is the only correct one. Yet it is the same room, the same scene, the same world. If we continue to film from the same vantage point — using the same lens, never changing scenes, never questioning the angle — we are assured of seeing the same things all the time. There may be a security in that method, but no guarantee of truth; also, there is no possibility for growth. Let’s face it; it would be a boring movie to watch, even if it is starring you!

What if the camera moved an inch to the right? Six inches to the left? What if you tilted the lens down three inches? You might realize you’d been standing on a fabulous Turkish carpet, made from the world’s finest wool. That your room is full of valuable antiques, beautiful art, delicate instruments, and the ceiling is a cathedral one, glassed, through which you can see a cloudless sky of perfect blue. Turn the camera another way, and you see the room is full of windows. There are the people you love, standing, smiling, waving — at you. They’ve been trying to get your attention, but your eye was behind that fixed lens, neither looking left nor right.

If we don’t like what we see, then MOVE. (Maybe get rid of the lens altogether! It’s so restricting.) The Work teaches us how to move that lens — right here, right now — with nothing but a piece of paper, a writing instrument, and our amazing minds.

When anger or sadness or confusion arises, take the thought that brought it on by the hand. Lead It gently into your consciousness (you’ll find It most willing, and not a scary thing at all; It doesn’t want to be trapped in your mind, making both of you miserable), and then ask It the four questions. Are you true? Can I absolutely know you are true? Who am I when you’re here? Be honest; It knows exactly how you are when It’s there. Sad, anxious, angry, withdrawing, whatever. And then, this is the opportunity to change the focus of that lens, with question number four: Who would I be if you weren’t here?

Pan the scene fearlessly. When that lens lights upon something as true, or truer than, the thought that caused you unhappiness, you get the chance to use the Turnaround. Ah! With your new perspective, you see three…four…maybe more! things that support that new perspective. Maybe it’s those folks at the window, smiling. Maybe it’s that you see what a wealth and abundance you already possess.

Do you see what I’m talking about? Do you realize how supported you are? That you have all you need in this present moment? You’ve got your camera, for one thing, and the strength to move that lens. How marvelous! No other species, to our knowledge, can do this. This is not Pollyanna-ism, for your mind simply will not accept anything that is not true for you once you have the courage to move that lens. The mind’s job is to back up whatever story you give it; if you don’t like what’s around you, maybe you could change your story? And maybe you can do this by changing what your lens has been trained upon. No one is behind that camera but you. (Who made the camera is another story…) I shifted my view, and now I’m cancer-free and moving to Ireland. Wow! Dream come true! Yes — and it can happen to you, too, whatever it is you desire.

I seem to have wandered from the Sudoku theme, but that’s okay. It’s because I moved the lens, backed up a few feet, and saw there was a much bigger story there.

Puzzles are just part of the picture. First Sudoku — then Life!

(Thanks, Rusty, for the fascinating discussion of Buddhist philosophy, right there in the Jolly Roger. See what you started? Thanks for helping me shift my lens yet again.)

One thought on “Byron Katie helps me do Sudoku”